From tents to static caravans 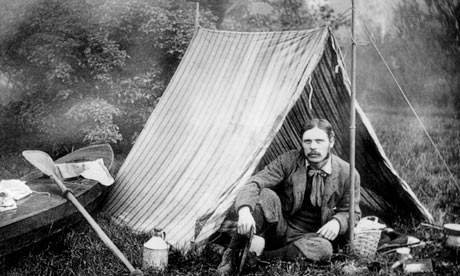 Thomas Hiram Holding, shown in the photo, was a British traveling tailor and is often considered the father of modern camping. His passion for camping developed as a child when he crossed the United States with his parents in a wagon train heading for the Oregon Territory. A well-travelled man, in the 1880’s he took a canoe and camping trip in Scotland. He wrote the first edition of “The Campers Handbook” in 1908.

Camping accommodations have evolved significantly since then. They started with sleeping “under the stars” and tents made of folded canvas, to small trailers for short camping adventures, motorhomes for extended traveling, and finally to static caravans for frequent visits and second homes.

In spite of the evolution, a number of campers enjoy each of these accommodations.

The next stage of evolution are caravans. They range from small pop-up tents and hard sides to larger ones that rival the size and comfort of motorhomes. They are comfortable, frequently have climate control and bath facilities, and are detachable from the towing vehicle.

The 1913 Earl Travel Trailer is reputed to be the oldest travel trailer in the world.

It was custom made for a Cal Tech professor by a Los Angeles carriage maker, and was restored in 1980.

In the figure it is towed by a Ford Model T. 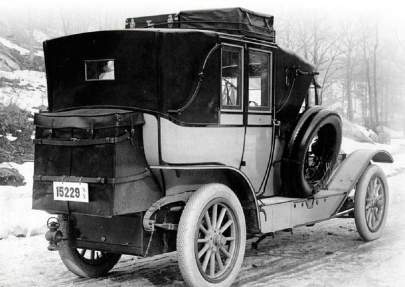 The origin of the motorhome dates back to 1910 when the Pierce-Arrow motor company introduced the Touring Landau model.

It was designed with the camper in mind, providing cargo compartments for camping equipment and an on-board toilet.

As motorhomes became more sophisticated, they attracted a new breed of enthusiasts interested less in camping and more in destinations and comfort.

The first static caravans were introduced to the UK in 1947. Compared to today’s standards they were very basic, with gas lighting, coal heating and a single gas burner for cooking. A layout with a double bedroom and a drop down bed in the living area was fairly standard. There was no bathroom or running water. 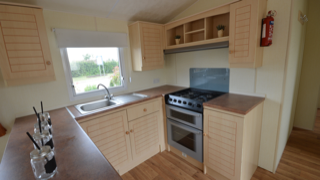 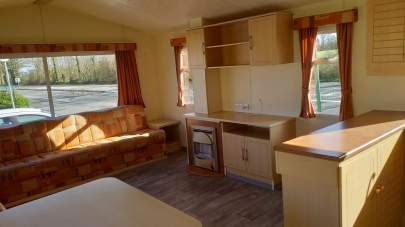 To many people, static caravans represent the most convenient way to camp. They offer all of the conveniences of a modern home and the flexibility of travelling to the location by personal car, air, train and/or ferry. The van provides storage of personal items brought along the trip.

Renting a static caravan relieves the renter from maintenance, but requires advance reservations, particularly at popular destinations and during high travel seasons.

Owning a static caravan allows the flexibility to stay for days, weeks or months, to accommodate guests, and to take "spur of the moment" trips. It also relieves the owner of transporting most personal items. Ownership also allows the camper to be part of a community of established residents.

To an American, the first caravan that comes to mind is shown in the figure. 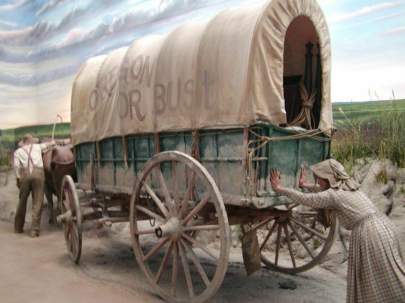 The caravan and Oregon Trail in this figure reflect the early experiences of Thomas Holding and many pioneering Americans. The covered wagon played a significant part in opening up the interior of the North American continent to European settlement from about 1745. These wagons provided occupants with living quarters and a means of transporting themselves, supplies and equipment. The Oregon Trail was a 2170 mile wagon route that was key to settling the Oregon Territory.

Being less constrained to the roadways of Europe, motorhomes in North America have taken a different “bigger is better” evolutionary path. The figure shown was randomly taken in the U.S. and by no means represents the largest available.

The reader should note that the caravan has incorporated no less than three modes of transportation, suggesting that the occupants have no intention to get out and “push”.

The challenge posed to driving large motorhomes or caravans are the unseen obstacles that can be encountered. As an example, the photo shows what a professional driver recently experienced in Orlando, Florida. 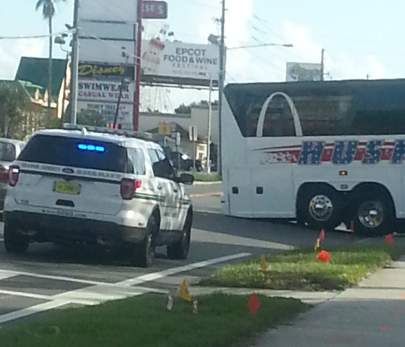 The bus could not free itself when the undercarriage struck the road. The police, and possibly a tow truck, were required to free the vehicle from the busy roadway.